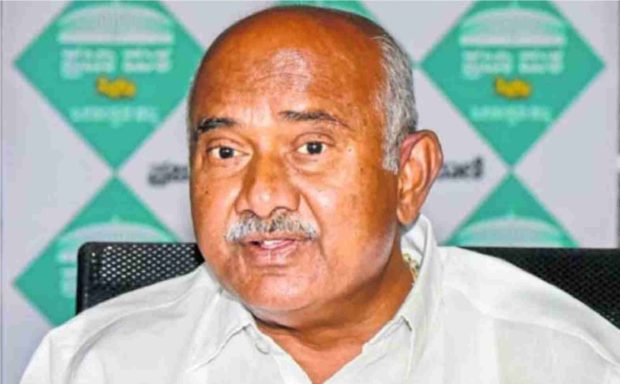 Bengaluru: The Karnataka government on Friday dismissed the allegation of disgruntled BJP MLC A H Vishwanath that the Irrigation Department has readied a Rs 21,473.67 crore tender in a hurry and without financial approval. Vishwanath, who has been demanding that Chief Minister B S Yediyurappa be replaced, also accused Yediyurappa’s younger son and BJP state unit vice-president B Y Vijayendra of interfering in the functioning of the government.

“The charges of Vishwanath that the tender of Rs 20,000 crore Bhadra upper canal project and Cauvery irrigation project was finalised without the consent and approval of the finance department is far from the truth,” the government said in a statement. It further said that the government gave its administrative approval following the consent given by the finance department on December 16, 2020. The technical advisory committee of the Union Water Resource (Jal Shakti) Ministry gave the nod for Rs 16,125.48 crore on December 24, 2020.

Vishwanath earlier in the day alleged in a press conference that no financial clearance from the Finance Department had been sought, no board meeting took place and the tender was readied in a hurry. Terming it a “scam”, he alleged that the intention was to take “kickbacks” from contractors. “Is this a contractor-oriented government?”, he asked. The BJP MLC, who had switched his loyalty from the Janata Dal-Secular to the BJP two years ago, alleged that the “entire state” including ministers,had been talking about Vijayendra’s interference in the administration. “Which minister is content today? His (Vijayendra”s) interference is in all the departments,” Vishwanath charged. His attack came in the midst of a three-day visit of BJP national general secretary and Karnataka in charge Arun Singh to the state to hold discussions with MLAs in the backdrop of some legislators seeking Yediyurappa”s replacement. Singh is taking part in a meeting of the party’s core committee on Friday before winding up his visit. Vishwanath also recalled that Rural Development and Panchayat Raj Minister K S Eshwarappa had earlier this year approached Governor Vajubhai Vala against the alleged interference by the chief minister in the affairs of his department.

The MLC said Yediyurappa had been to “jail in the past due to his family”. “Is it not true that Yediyurappa had been to jail because of his children? We are afraid that this time again he will land in jail,” Vishwanath said. After meeting Singh on Thursday, Vishwanath had demanded that the 78 year-old Yediyurappa be replaced, considering his age and alleged interference by his son. The Chief Minister said the BJP high command would decide on the action against Vishwanath for his recent “open statements,” as he rubbished as “baseless” his charges against Vijayendra of interference in the administration and “kickbacks” in an irrigation project. Reacting to the allegations by Vishwanath on the “scam” in the Irrigation department, JD(S) leader and former Chief Minister H D Kumaraswamy told reporters in Kolar that “this is a government which believes in loot”.

“This is not restricted only to the Irrigation department. It”s a government which believes in loot. I have stopped speaking about it because in 2008 also I had raised the matter with evidence. But the case could not reach the logical end”, Kumaraswamy said.