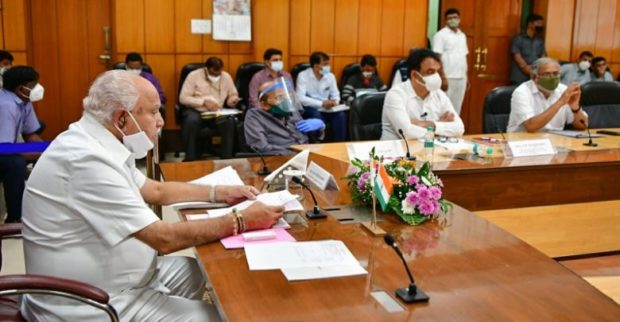 Bengaluru: With an aim to put Karnataka on top in terms of public healthcare in the country, the state government on Thursday has come up with a detailed plan to upgrade facilities at sub-health centres and tertiary health centres where people can avail quality treatment free of cost.

As per the plan, the government intends to convert primary health centres into wellness centres by enhancing healthcare infrastructure and facilities and increasing the number of doctors and paramedics.

“We have come up with a novel idea to improve our health services. We will make a sincere effort to materialise the dream of Prime Minister Narendra Modi to improve the healthcare system,” Chief Minister B S Yediyurappa told reporters after watching a presentation by the state Health Minister Dr K Sudhakar on Thursday.

According to Yediyurappa, there will be one ambulance each at every PHC, which will function 24×7.

He also said new MBBS passouts will be made to serve in rural areas for some time.

These PHCs will prevent people from running to taluk or district headquarters for treatment, the Chief Minister said.

He also said he would earmark more funds for the health sector in the upcoming budget.

Briefing reporters, Sudhakar said there were 2,380 primary health centres across the state and each one caters to 30,000 people.

Each PHC has six beds at present, which his department wishes to enhance it to somewhere between 12 to 20.

The number of doctors at each PHC will be increased from one to three to four.

There will be a lady doctor and an AYUSH doctor.

According to him, one of the major reasons behind the reluctance of doctors to serve in the rural areas is the lack of proper residential facilities.

To address this shortcoming, the health department has decided to build residential-cum-medical complexes spread over two acres of land.

It will house an administrative building, primary health centres, houses for doctors, nurses, paramedics and other staff.

There will be a mother-and-child section in the PHC, which will be 30 per cent of the total area of the hospital.

It will also have a laboratory where various tests can be performed including sugar tests.

“The facilities here will be such that this will not be just primary health centre. This should be a predictive health centre also. If someone is likely to get a heart attack in the next five to 10 years, these PHCs should be able to predict that this person is prone to heart disease,” Sudhakar said.

The minister also said the state government will manage these PHCs from the funds received under the National Health Mission.

As per the plan, the sub-health centre below the PHCs to the tertiary health centres or the super specialty hospital will be connected through the internet.

Similarly, the community health centre for a population of 80,000 people will also be upgraded.

Taluk hospitals, that will cater to 1.5 lakh to two lakh population, will also have mother and child wing, Sudhakar said.

According to him, 18 district hospitals are attached to medical colleges coming under the medical education department, and 15 others come under the health department.

All these hospitals will be converted into medical college hospitals in the coming days, the health minister told reporters.

The district hospitals presently have a 200-bed facility, which will be upgraded to 500 to 700 beds.

Further, all of them will have trauma centres, cardiology and oncology departments.

“We want that these specialised treatments should not be restricted only to Bengaluru or Hubballi but all the districts so that the tertiary treatments are available in their respective districts,” the minister said.

PFI received over Rs 100 cr in its banks over the years: ED to Kerala court
Woman’s body found in plastic bag on Mumbai beach