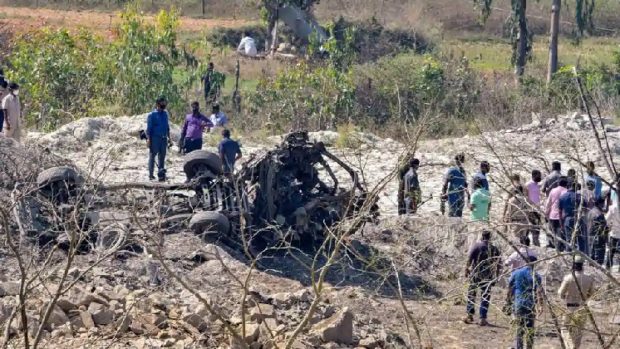 Bengaluru: The Karnataka government on Monday asserted that no illegal quarrying or mining would be allowed in the State and said the Revenue Commissioner will probe the blast near Shivamogga, which killed six people, even as the opposition staged a walkout, demanding a judicial probe.

As soon as Home Minister Basavaraj Bommai made the announcement about the probe and that police too are investigating it, Leader of the opposition Siddaramaiah demanded that a judicial commission, headed by a sitting High Court judge, be constituted, ”for the truth to come out.”

As his demand was not acceded to, the LoP said the government’s conduct was creating a suspicion that it was trying to protect someone and staged a walkout from the assembly along with other Congress legislators.

Six people were killed in the powerful explosion of a truckload of gelatin sticks at a stone crushing unit in Shivamogga district on January 21.

Replying on behalf of the government to the incident and the probe relating to it as Siddaramaiah had raised the issue, Bommai admitted that illegal quarrying or mining has been going on for some years now under successive governments.

He said there was a nexus between landholders, quarry landholders, explosive suppliers and some officials, leading to such illegal activities and stressed the need to break it and also spoke of steps like increasing fine and jail term for breaking rules and making ‘mineral protection force’ effective.

On the Shivamogga incident, Bommai said officials had given the owners license for crushing despite knowing that illegal mining or quarrying was taking place at the site and cases were booked against them earlier.

Explosive materials were brought in from Andhra Pradesh, he said ”it looks like no rules or regulations or permitconditions had been followed….investigation is going on andmerciless action will be taken against all those responsible.”

On Siddaramaiah’s demand that those guilty must be booked under Section 302 of IPC for murder, instead of Section 304 (culpable homicide), he said it can be done in due course, based on the investigation

”The government has taken this case very seriously, especially transportation and storage of large quantities of explosives. Reports suggest it was about 1,350 kilograms, but only a probe can ascertain it,” he said, adding the control on explosives is necessary to check illegal mining.

As part of the probe police have seized such materials in Anantapur district of Andhra Pradesh, Bommai said.

Expressing worry about large quantity of gelatin sticks transported and its outcome had it reached the hands of anti-socials or terrorists, he said steps were on for ”excessive control” of explosives, as he noted that cases were booked against those involved under the stringent explosives act.

He said illegal quarrying or mining would be stopped inKarnataka and only those with licenses will be allowed tofunction.

”It has been decided that the probe will be by the RevenueCommissioner after the opposition leader and others had said the Deputy Commissioner (of Shivamogga) should not probe as he had not acted against such illegal activities,” Bommai added.

Unhappy with his response, the LoP cited reports of involvement of politicians and officials in illegal quarrying or mining and urged the government to get a survey done across the State to identify those that are illegal.

”Take strong measures to stop it, take strict action against those involved, especially errant officials,” he said, as he noted that an independent agency should inquire into the incident and it was not possible for the Revenue Commissioner to do so as summons and warrants have to be issued with the probe stretching to neighbouring Andhra Pradesh.

”If it is not inquired into by a sitting high courtjudge, the truth will not come out…it will seem as though the government was trying to protect someone,” he said as heled Congress MLAs in staging a walkout.

Earlier, Siddaramaiah while pointing to reports of large-scale illegal quarrying in the State, especially Shivamogga, urged the government to halt them at once as he also voiced concern over transportation of large quantities of explosives.

”In the Pulwama blast, it is said that about 250 kilograms of explosives were used, whereas reports of the blast inShivamogga said it was 1,350 kg.” He demanded a criminal case be registered against all errant officials and those who supported illegal activity.

In the Legislative Council too, the Congress made a similar demand for the probe, with the opposition leader SR Patil saying the blast pointed to ‘serious lapses’ and made a comparison to the quantity used Pulwama and in Shivamogga.

He said if illegal mining and unlawful transportation of explosives cannot be controlled by the Deputy Commissioner and Superintendent of Police of Shivamogga even in the CM’s home district, one wondered what the situation would be in the rest of the State.

BJP MLC Ayanur Manjunath alleged that those who died were not labourers, but some people engaged to transport the explosives and were part of the nexus.

The leader of the house Kota Srinivas Poojary said the CM has assured stringent action against the illegalities.

The quarry owner and two of his associates have so far been arrested.