Lok Sabha adopts motion to do away with ‘Question Hour’ 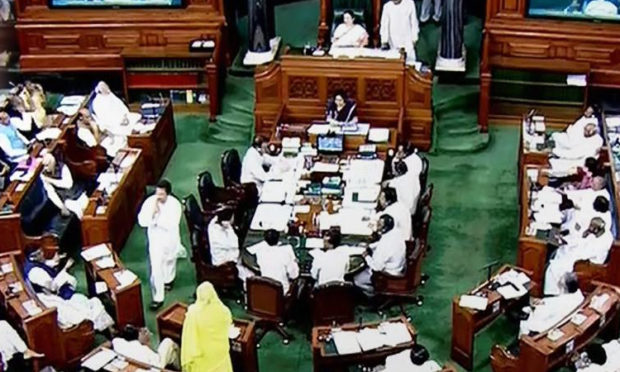 New Delhi: Lok Sabha on Monday adopted a motion to do away with Question Hour and private members’ business during the Monsoon session, which is being held amid the coronavirus pandemic.

Criticising the move, the opposition led by the Congress said that Question Hour is the “golden hour of the House”.

Leader of the Congress in Lok Sabha, Adhir Ranjan Chowdhury, said the argument and rationale that has been put forth by Parliamentary Affairs Minister Pralhad Joshi is far from convincing. He said the Question Hour is recognised as an essence of parliamentary democracy and executives are accountable and answerable during the Question Hour.

In such an extraordinary situation, if the House is running, “why Question Hour is singled out,” he asked.

“We get chance to raise issues of common people. Question Hour is simply a golden hour of the House,” he said, adding by doing way with this, the government is trying to suppress this democratic practice which has been followed since Independence.

Moving the motion, Joshi said the Lok Sabha session is being held in extraordinary circumstances amid the COVID-19 pandemic and this House resolves that starred questions and private members’ business may not be brought before it for the transaction during the session.

AIMIM chief Asaduddin Owaisi said the Question Hour and private members’ business are a cornerstone of democracy and it is very much essential for the existence of parliamentary democracy.

“I urge the Speaker not to allow the executive to encroach on the territory of the legislature. It is a shameful day,” he said.  He also requested for a division, which was not accepted by Lok Sabha Speaker Om Birla.

Manish Tewari (Congress) said this is the only time when the opposition can hold the government accountable.

TMC MP Kalyan Banerjee said the Question Hour is an integral part of the basic structure of parliamentary procedure and “we cannot destroy that part”.

Today, the government has pressure to pass bills, he said. “We also have our views to express,” he said adding, “kindly do not take away this advantage. It will take the entire glamour, 50 per cent glamour of running Parliament,” he added.

Joshi said before arriving at this decision, deputy leader in the Lok Sabha, and Defence Minister Rajnath Singh spoke to almost all leaders of various parties.

“I would like to ask various leaders who questioned the suspension of Question Hour that all state assemblies including Punjab, West Bengal, Rajasthan, Andhra Pradesh and Kerala have run sessions for a day or two and passed several bills, whereas the government of India decided to run for 18 days and hold discussion on bills,” Joshi said.

People are saying this is the basic structure of Parliament then what had happened in 1975, he questioned. In last five years, 60 per cent of Question Hour in Rajya Sabha and 40 per cent in Lok Sabha was wasted, he added.

There are so many ways to question the government and it is not running away from discussion and “we are going to reply to all questions which you are going to raise,” he said.   The defence minister said he has discussed the matter with several leaders and noted that this session is being held in an extraordinary situation.

“We need support from all” as the House will run only for four hours.If somebody wants to ask a question, they can do during the Zero Hour,” he said, adding most of the leaders have agreed on the issue of doing away with the Question Hour.