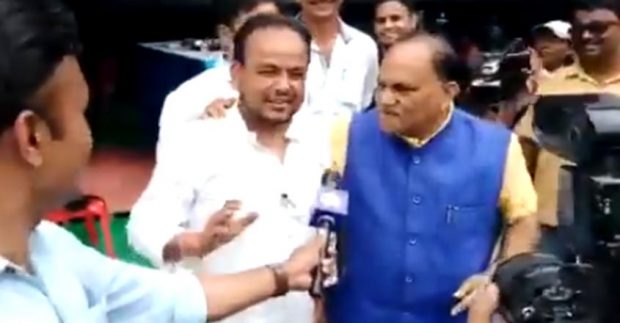 Ranchi: After unrestrained ‘Ram bhakts’, a BJP minister in Jharkhand was seen on national TV brazenly asking a Muslim MLA to chant ‘Jai Shri Ram’, insisting he was a “Ram wala” and that “Babur or Timur Lang”, the medieval era Muslim conquerors, were not his ancestors.

It all started on a lighter note when C P Singh, the state’s urban development minister, and Irfan Ansari, a Congress MLA, were standing outside the Legislative Assembly surrounded by cameramen.

Singh was seen wrapping his arm around Ansari’s shoulders and asking him to chant the slogan hailing the Lord.

The sacred thread is usually tied by Hindu priests on the hands of believers to ward off evil.

But, what had started as good-natured banter soon turned into a heated argument when the minister repeated his demand, saying “you also belong to Ram. Babur, Timur Lang, (Mahmud) Ghazni, (Muhammad) Ghori were not your ancestors”.

“People need jobs, roads, electricity. They want drains to be cleaned. Go to Ayodhya and see the condition of Ram there,” a visibly agitated Ansari said.

As the tussle appeared getting out of hand, the two lawmakers disengaged and went their separate ways.

However, speaking to reporters on Friday, Singh said a section of the media had “twisted” the issue and that the conversation between him and Ansari was in a lighter vein.

“Some media people try to see everything from a communal angle… Irfan’s father (a former MLA) is my friend. We two (Singh and Ansari) were sharing lighter moments in the House and some people sensationalised it,” Singh said.

Ansari, who was standing alongside Singh, said, “This is our culture. I will chant ‘Jai Shri Ram’ and C P Singh is like my uncle, and he will say ‘Allah-o-Akbar’.”

Chanting ‘Allah-o-Akbar’, Singh added that Hindus and Muslims have been living in India in harmony for centuries.

Last month, a young Muslim man Tabrez Ansari was tied to a pole and beaten up for several hours by a mob in Jharkhand’s Saraikela-Kharsawan district after he was allegedly caught stealing a motorcycle. He died a few days later.

His tormentors were alleged to have forced him to chant ‘Jai Shri Ram’ and ‘Jai Hanuman’.

Ansari’s death had set off massive public outrage and protests were organised in several cities and towns in the country.

On July 23, forty-nine celebrity filmmakers, authors and others from different walks of life had written an open letter to Prime Minister Narendra Modi voicing concern over “religious identity-based hate crimes” and noted that “Jai Shri Ram’ had become a “provocative war cry” leading to incidents of lynching.