Turnout 75.02% in 7th phase in WB, polling by and large peaceful 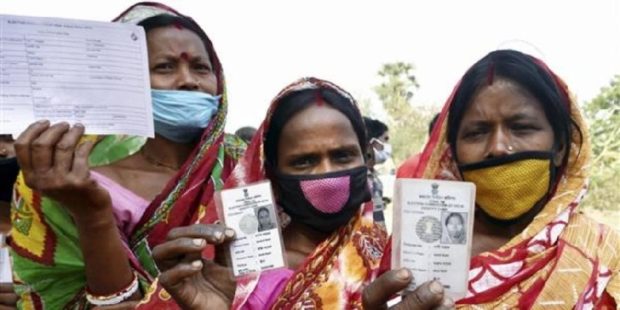 Kolkata: An estimated 75 per cent votes were cast on Monday in West Bengal in the seventh and penultimate phase of the assembly election, which was by and large peaceful, Chief Electoral Officer Aariz Aftab said.

He said that 75.06 per cent voter turnout was recorded till 5 pm in 34 seats where polling was held and is expected to go up as the polling ended at 6:30 pm.

”Polling was entirely peaceful today and there was no incident of violence anywhere in the state,” Aftab told reporters.

”The seventh phase is the quietest and incident-free phase. There was no bomb blast from anywhere during today’s polling, not even from sensitive places. We are extremely happy. The police and the central forces have done a commendable job,” ADG (Law and order) Jag Mohan said.

Voting began at 7 am in 12,068 polling stations spread over nine assembly constituencies each in Murshidabad and Paschim Bardhaman districts, six each in Dakshin Dinajpur and Malda and four in Kolkata, including Chief Minister Mamata Banerjee’s home turf Bhabanipur.

Malda, Murshidabad and Dakshin Dinajpur are minority-dominated and the fight in these districts is between the Trinamool Congress and the Congress-ISF-Left alliance, except in a few pockets where the BJP has gained strength.

Till 5 pm, the highest voters’ turnout of 80.30 per cent was registered in the Murshidabad constituency, and the lowest polling percentage of 59.91 per cent was recorded in the Kolkata Dakshin seat, the CEO added.

Although the polling passed off more or less peacefully, there were a few incidents of scuffle between rival party workers in some parts of the State.

A few such incidents were reported from Asansol in Paschim Bardhaman district where TMC candidate Sayoni Ghosh claimed that BJP activists tried to jam booths in the constituency.

The allegation was dubbed as baseless by BJP candidate Agnimitra Paul, who asserted ”Ghosh is making excuses sensing defeat.”

There was a commotion in the Rash Behari constituency in the city after BJP candidate Lieutenant General (retd) Subrata Saha’s agent Mohan Rao was accused of molesting women voters inside a polling booth, police said.

The agent was detained after several women voters claimed he tried to drag them by holding their hands inside Bidya Bharati School, a police officer said.

Rao rubbished the allegations and said no such incident had taken place.

”We have received a complaint in this regard and a probe is underway,” the official said.

The TMC candidate for the constituency, Debashis Kumar claimed that he was stopped from entering a booth in the area by central forces. The central forces, however, denied the allegations.

In the Jamuria seat, Left Front candidate Aishe Ghosh alleged that agents of CPI(M) were stopped from entering a booth by TMC workers, a charge which was denied by the ruling party.

In Murshidabad, TMC district president and MP Abu Taher was heckled by party workers when he was touring the area.

Taher, however, claimed that Congress activists had heckled him. Congress dubbed the allegations as baseless.

In the Bhabanipur constituency TMC candidate Sovandeb Chattopadhyay claimed that he too was stopped from entering the booth in his area by central forces.

The security forces denied the allegations and the office of the chief electoral officer intervened and sorted out the issue.

Security was tight in view of the violence in the previous phases, particularly the death of five people at Sitalkuchi in Cooch Behar, including four in CISF firing, in the fourth phase of polling on April 10, an EC official said.

The ECI has ordered repoll on April 29 at booth No. 126 of the Sitalkuchi seat where voting was cancelled after the four were killed in the firing.

The poll panel has deployed at least 796 companies of central forces in the seventh phase to ensure free and fair voting, he said.

Each company of central armed police force has around 100 personnel and officers.

The EC also put in place measures to ensure strict adherence to health protocols during the election process, including wearing face masks and maintaining distancing to check the spread of COVID-19.

The State registered its highest single-day spike of 15,889 COVID-19 cases on Sunday, while 57 more people succumbed to the virus.

Election to two assembly constituencies Samserganj and Jangipur in Murshidabad district where polling was originally slated on Monday – has been adjourned following the death of two COVID-19-positive candidates.

The EC has fixed May 16 as the date for polling in the two seats.

The eighth and final phase of polling is scheduled for Thursday, April 29.

Votes will be counted on Sunday, May 2.