Will donate half of reward money for child’s education: Railway pointsman wins over peoples’ hearts 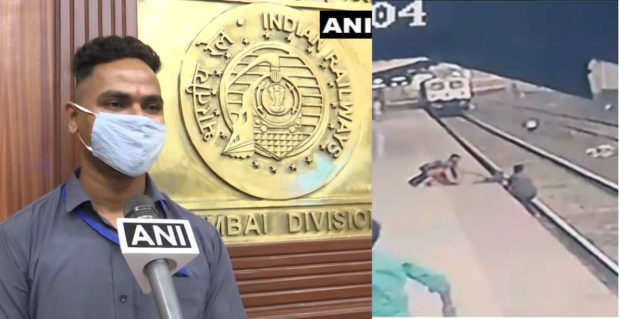 Mumbai: Mayur Shelke, a railway pointsman who saved the life of a six-year-old boy has decided to donate half of the rewarded money that he has received to the visually impaired mother of that child for his studies.

On April 17, the boy fell on the railway tracks at Vangani station near Mumbai and Shelke hauled him onto a platform in the nick of time while a speeding train was approaching.

On Tuesday afternoon, railway officials had honoured Shelke for his bravery with an award of Rs 50,000. However on Thursday, Shelke said that the moment he receives the money he would give half of it for the child’s bright future and his studies.

“I will give half of the rewarded money for the child’s bright future and his studies. The moment I receive the money, I will immediately hand it over,” he said.

I’ll give half of the amount, given to me as token of appreciation, for that child’s welfare & education. I came to know that his family isn’t financially strong. So I decided this: Mayur Shelkhe, pointsman who saved a child who fell on tracks at Vangani railway station on 17.04 pic.twitter.com/IWdacY0DFf

“I learnt that the boy is from a poor background and they cannot afford to give him education. Since I saved the boy, I decided to donate half of the award money for his bright future,” Shelke told PTI.

The boy’s mother happens to be blind and he fell on the tracks when they were walking close to the edge of the platform. Coincidentally, a speeding outstation train was approaching the platform at that time. Shelke rushed to rescue the child against a moving train and bundled him onto the platform before saving himself from the train.

#WATCH | Maharashtra: A pointsman in Mumbai Division, Mayur Shelkhe saves life of a child who lost his balance while walking at platform 2 of Vangani railway station & fell on railway tracks, while a train was moving in his direction. (17.04.2021)

This gesture of Shelke has been appreciated by several netizens.

Bhai Mayur, ek hi Dil hai. Kitni baar lootega. You literally put your own life to save a child from near certain death and now donating half of what’s rightfully yours,” wrote a Twitter user.

“This shows his upbringing … Salute to his parents for teaching him the values of life and be a better person in the society. There are very few people like him in today’s world. For sure he will be an Icon for many,” shared another. “Salute to this man,” commented another person.