Lucknow: Upstaging Mulayam Singh Yadav, Chief Minister Akhilesh Yadav was on Sunday anointed the SP president in place of his father at a party national convention here which also proposed the expulsion of “outsider” Amar Singh and removal of Shivpal Yadav from the post of UP chief.

Mulayam Singh Yadav however termed as illegal all decisions taken at the national convention. He said that he would hold an SP convention on January 5.

He also expelled Ramgopal once again from the party for six years.

Minutes after Mulayam Singh Yadav earlier termed the convention called by Ram Gopal Yadav as “unconstitutional”, the meeting unanimously decided to crown Akhilesh as head of the SP.

After a brief truce in the ruling Samajwadi Party on Saturday, the open war in the party was all out in the open with the national convention declaring Akhilesh Yadav as party president.

The proposal was met with a huge applause by party cadres gathered at the sprawling Janeshwar Misra Park amid chilly conditions.

Ram Gopal also moved a proposal to make Mulayam Singh, the founder president of the party, as party patron and removing Shivpal Singh Yadav from the state unit post.

Earlier this morning as soon as the national convention got underway at the Janeshwar Misra park, Mulayam Singh issued a letter declaring the convention as unconstitutional.

Although Mulayam warned that participation in the convention will be taken as indiscipline and action will be initiated against those attending it, almost all the senior leaders who had been longtime associates of Mulayam shared dais with Ram Gopal and Akhilesh.

Soon after being proposed as the national president of the party, Akhilesh Yadav said his respect for his father was more than ever and that he would stand against those conspiring against the party.

“…People might raise questions and level allegations but I said this before and say it again that as his son if there is any conspiracy against the party and him it is my duty to stand against them”, he said.

“I had said that I was ready to step down as state unit president earlier too …he had made me the CM and gave me a chance to work…” he said. 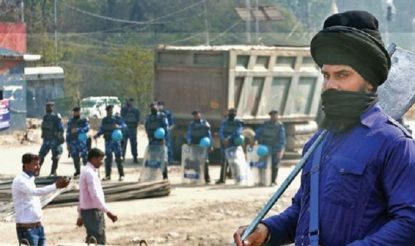