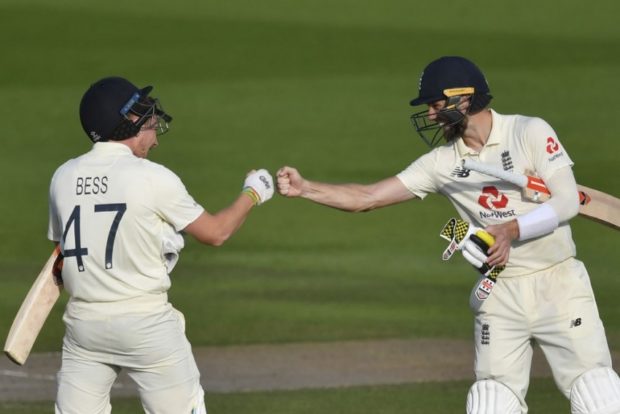 Manchester: Jos Buttler and Chris Woakes led a remarkable comeback for England in a three-wicket victory over Pakistan in the first test on Saturday, August 8.

The pair went on the counter-attack at the fall of the fifth wicket in England’s second innings and shared a sixth-wicket stand of 139 on day 4 at Old Trafford. No fans were present for the exciting finale due to the coronavirus pandemic restrictions.

Buttler was out for 75 while Woakes hit the winning runs and was undefeated on 84 as England finished on 277-7.

Leg-spinner Yasir Shah (4-99) had put Pakistan in pole position with two wickets as England, chasing a target of 277 for victory, slipped from 86-1 to 117-5 in its second innings.

Ollie Pope (7) was the fifth man out to a remarkable delivery from left-armer Shaheen Afridi which flew off the pitch. As Pope flinched in surprise, the ball clattered into his glove and lobbed high towards Shadab Khan coming in from gully.

That dismissal brought Buttler and Woakes together and the game increasingly swung in England’s favor.

Wicketkeeper Buttler more than made up for his poor match performance behind the stumps.

When he was out for 75, leg before wicket to Yasir, England only needed 21 runs to win.
Woakes, selected as a seamer, showed his batting skills with a superb cover drive to bring up his half-century on an unpredictable wicket. Dom Bess (0 not out) was with Woakes at the end.

Earlier, Pakistan resumed on 137-8 and added a quickfire 32 runs before being bowled out for 169.
Broad finished with figures of 3-37, taking his tally to six in the match, and there were also two wickets apiece for Woakes and Stokes, who both had figures of 2-11.

Pakistan scored 326 in its first innings before dismissing England for 219.

The second of three tests starts Thursday at Southampton.