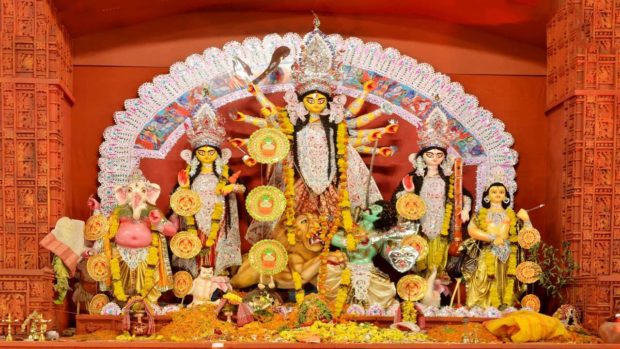 Kolkata: From bringing back a Durga puja organised by a zamindar four centuries back to a memorial in honour of those who died of Covid-19, from the yearnings of children for new dresses for the festive days to an oxygen plant — puja committees of Kolkata have chosen myriad themes to attract people.

People throng puja pandals to have a glimpse of the idols and decoration based on these themes on the day of ”Mahashtami”, the third day of the festival.

An organiser at Barisha in south Kolkata has recreated the environment of a puja that was held 400 years ago by a zamindar of Rajsahi (now in Bangladesh). It was found during research that Raja Kangsa Narayan had spent Rs 9 lakh for the puja held in 1606, organisers claimed.

The idol had been created by Ramesh Bhaskar, one of the best claymodellers of those days, Barisa Sabarna Para Puja committee claimed citing research done by it with help from experts.

“In our 73rd year, we have sought to bring back the puja at Rajsahi by the then zamindar Kangsa Narayan and by any estimate, it was one of the most expensive pujas at that time. Rs 9 lakh in 1606 is equivalent to Rs 300 crore now,” the puja committee General Secretary Barun Ghosh told PTI.

The Barisa puja committee has christened the celebration as “300 kotir pujo” (puja of Rs 300 crore).

The theme of Hatibagan Nabinpally, a puja committee in North Kolkata, is remembering those 20-odd people who died of Covid-19 in the locality.

“Our pandal has laminated photos of these persons with their names in the interiors and everything is in low key. We call it ”Tarpan” (an offering to those who are no more),” a puja committee spokesperson said.

Suruchi Sangha, one of the most popular pujas in the city, themed its celebrations on the yearning of every child to his/her parents for a new dress before the puja.

Swaroop Biswas said on behalf of the committee the pandal is decked out in children”s dresses and there is a voice-over of a child urging her parents to buy her a dress for puja and the mother assures her they would go shopping the next day.

“The theme is called ”Abdar” (Plea). We have chosen this theme this time to put the focus on children who had been under so much stress mentally, physically as well as economically due to the hardships faced by their parents during the pandemic,” Biswas said.

The Telengabagan Puja committee in north Kolkata has themed its puja on Oxygen plant.

A puja committee spokesperson said, “Many people died of oxygen crisis in the pandemic. There are also people in our locality who have either left us or were in a critical condition for days due to oxygen deficiency after being infected with Covid. We decided this would be our theme; it is something with which people can immediately connect to.”

There are models of storage tank and machinery used in oxygen plants.

The Sahid Colony Sarbojonin Durga Puja in Sodpur, in Northern suburbs of Kolkata, also themed its celebrations on childhood.

“The path leading to the marquee has panels and murals showing children confined or caged in homes in the pandemic. The pandal also has colourful balloons soaring into the sky indicating freedom from bondage,” Papai Das, a puja committee member said.