The media are described as the citizens’ window to the world because whenever any situation arises, the whole nation looks up to journalists to know what is happening. This role becomes even more prominent during crises and war.

In India, The Kargil war of 1999 is Nation’s first war on television, in fact, it was the first ‘live’ war of the South Asian region.

The Kargil War was fought by the Indian Army with Pakistani infiltrators. The war occurred at a time when electronic media in India was just introduced. This enabled the war to be telecast live across the nation.

According to senior journalist VC Natrajan “the press had access to forward areas when the war broke out. Neither the top brass of the armed forces nor the bureaucracy made any effort to hinder the media from reporting what was happening on the battlefront.”

The war then turned into a news propaganda war, the press briefings given by government officials of each nation produced conflicting claims and counterclaims.

The Indian government placed a temporary News Embargo (a request or requirement by a source that the information or news provided by that source not be published until a certain date or certain conditions have been met) on information from Pakistan, banning the telecast of the state-run Pakistani channel PTV and blocking access to online editions of the Dawn newspaper.

While the Pakistani media criticised the move, Indian media claimed it was in the interest of national security.

Impact of the media coverage

It is said that it was not completely open coverage, no graphic details of bloody encounters and mortal combats were shown. But, the Tiger Hill bunkers gave Indian TV some of its best war footage. Several media houses provided facts, figures, official statements, and educative editorials. They also covered the human side of the war and built an emotional connection.

Critics had also accused the TV of turning the war into an entertaining serial.

How was it done?

During that time, the media had to rely on primitive methods to transport the shooting tapes. Throughout the war, clips were transported to Srinagar and from there it was carried to Delhi by the visiting VIPs and army convoys.

There were also blunders like the blazing lights of cameramen outside the Brigade Headquarters at Drass drew the attention of the enemy which led to heavy shelling in which four soldiers were killed and the correspondent of a national daily was injured.

Also, the Star News announced the date and time of the assault on Tiger Hill, three days before it took place.

Senior journalist Barkha Dutt gained prominence after her frontline war reporting on the Kargil war. She also did a live commentary during the ‘secret’ Tiger Hill operation. 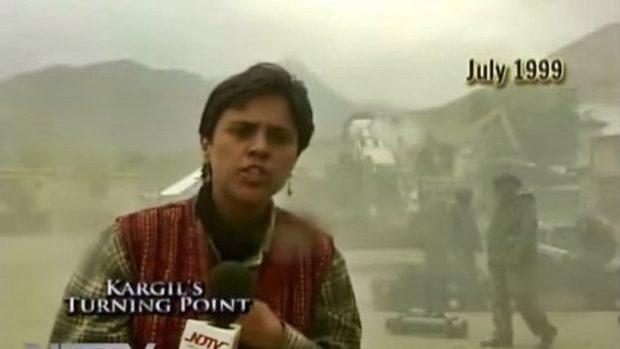 Many argued that her live telecast during the counter terror operations was completely irresponsible as it only seemed to help the terrorists and their handlers. She is accused to have caused casualties on the Indian side as she gave away military locations in her broadcast.

He mentioned that after the war he invited Barkha Dutt to his office and admired her for the professionalism she showed while reporting in the war. He then politely told her that she might have unintentionally shared Army’s plan with enemy by saying that “our next target is Tiger Hill”. This, however, does not prove that Barkha’s reporting caused casualties on the Indian side.