Mysore Sandal Soap: Fascinating history of the soap that began with the WWI If you are a resident of Karnataka or have visited Mysore at some point in life, then the chances of you coming across Mysore Sandal Soap are high. The soap holds the same popularity as it did hundred years ago.

Where it all began?

The state of Mysore was the largest producer of Sandalwood in the world. When World war I broke out, a large resource of sandalwood was leftover as they could not be sent out due to war.

Around that time in May 1916, Krishna Raja Wodiyar IV (the then Maharaja of Mysore) and Mokshagundam Visvesvaraya (the then Diwan of Mysore), set up the Government Sandalwood Oil factory at Mysore for sandalwood oil extraction. It was established to extract oil from sandalwood and utilize the logs of wood that were waiting to be exported.

Two years later, the Maharaja was gifted a rare set of sandalwood oil soaps. This induced the idea of making similar soaps at the Government Sandalwood Oil factory. A technical person from Bombay was invited and arrangements were made for him to do the experiments on the premises of the Indian Institute of Science (IISc). At the same time Sir M.V. also identified a young and bright scientist, S.G. Shastry involved in research at IIsc and was sent to England to study the soap manufacturing process.

Soon the soap hit the market and became popular among the masses.

Mysore Sandal Soap became one of the great contributions to the motherland by Sri Krishnaraja Wadiyar IV and Dewan Sir M. Visvesvaraya.

Shastry decided to give the Mysore Sandal Soap a unique shape and innovative packaging, as back in the days, most soaps were rectangular in shape and packed in thin, glossy, and brightly colored paper.  To help Mysore Sandalwood soap to stand out, Shastry gave the soap an oval shape. He also designed a rectangular box resembling a jewelry case— with floral prints and carefully chosen colors. At the center of the box was the unusual logo,  Sharaba, a mythical creature with the head of an elephant and the body of a lion. 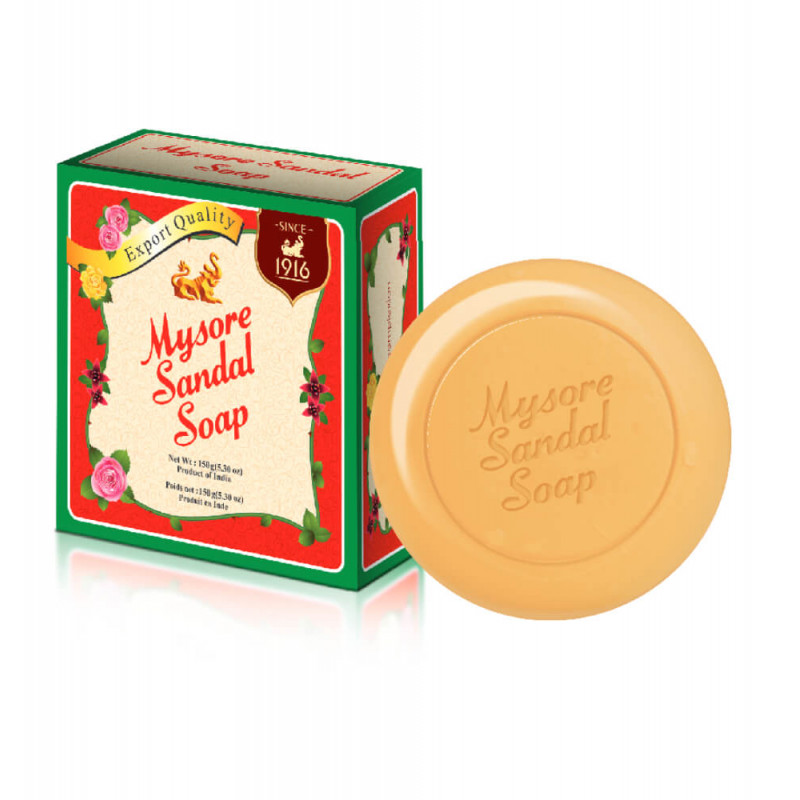 The creature was considered a symbol of wisdom and courage and also symbolized the state’s rich heritage. The message ‘Srigandhada Tavarininda’ (that translates to ‘from the maternal home of sandalwood’) was printed on every Mysore Sandal Soapbox

This was followed by an unconventional advertising campaign.  Neon-colored signboards advertising the soap were seen in cities across the country.  The soap was even advertised in Karachi as as part of a camel procession.

Although in 1980, it was merged with the oil extraction units (in Mysuru and Shivamoga) and incorporated into one company called Karnataka Soaps and Detergent Limited (KSDL). In the early 1990s, competition from multinationals led to a drop in demand for the soaps. Soon the company forayed into other types of soaps, incense sticks, hand washes, essential oils, and talcum powder but the Mysore Sandalwood Soap continues to be its main product.

KSDL has been encouraging farmers to grow sandalwood through its ‘Grow More Sandalwood’ program.

This program gives farmers sandalwood saplings at affordable rates and offers a buy-back guarantee. The KSDL has also partnered with the forest department to ensure that a sandalwood sapling is planted for every sandalwood tree cut down for extraction.