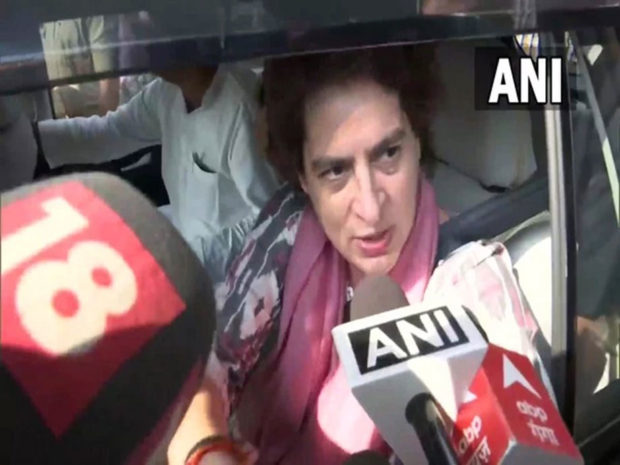 Lucknow: Congress leader Priyanka Gandhi Vadra was on Wednesday stopped by Uttar Pradesh Police from going to Agra to meet the family members of a man who died in police custody and was later taken to the police lines.

The police said the Congress general secretary was stopped at the Lucknow-Agra expressway as the Agra district magistrate had requested not to allow any political personality to go there following the man’s death. “She has neither been taken into custody nor arrested. Because of the massive crowds, the movement of traffic was being hampered and she was first asked to either go to the party office or her residence but when she did not agree, she was sent to the police lines,” Lucknow police commissioner D K Thakur said.

A Congress spokesman had claimed that Priyanka Gandhi has been taken into custody while she was going to Agra to meet the family members of the sanitation worker who had died in police custody. To a query from newspersons in Kushinagar on Priyanka Gandhi being stopped from going to Agra, Uttar Pradesh Chief Minister Yogi Adityanath had earlier in the day said, “Law and order is supreme and no one will be allowed to play with it.” While being taken to the police lines, Priyanka Gandhi told newspersons that she will definitely go to Agra.

The Congress spokesman had alleged that Priyanka Gandhi was made to stop at the expressway for about two hours and later taken into custody, A similar confrontation had occurred early this month when the Uttar Pradesh Police had prevented the Congress leader from visiting the families of farmers killed in Lakhimpur Kheri. She was taken into preventive custody for over 48 hours before being allowed to visit the families along with Rahul Gandhi and other Congress leaders.