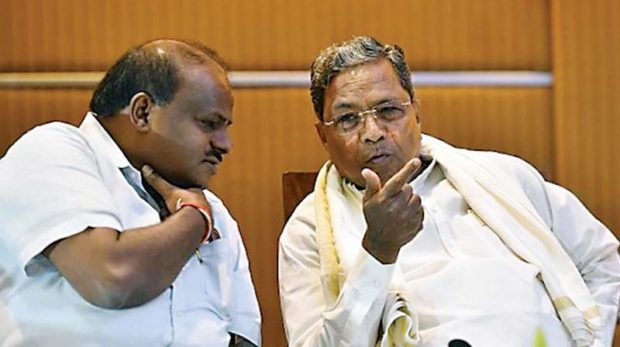 Bengaluru: Former Karnataka Chief Ministers Siddaramaiah and H D Kumaraswamy on Sunday voiced concern over recent incidents of labour unrest at some private units in the state, saying such incidents were not conducive for industrial growth and all issues must be resolved amicably.

The leaders in separate tweets, referred to the violence at Wistron’s iPhone manufacturing facility at Narsapura in Kolar district and the ongoing strike at Toyota Kirloskar Motor (TKM) in the state.

“The crisis between management and employees of private companies must be resolved amicably with the intervention of the government and I appeal to the Chief Minister to abolish all anti-people laws already in force,” Siddaramaiah tweeted.

The Congress leader claimed that Industries Management Association had stated that employees did not receive 80 per cent of their pay during the Coronavirus lockdown.

Quoting the association, he said about 70 per cent of temporary hands and trained workers were fired during this period, resulting in lakhs being rendered jobless.

Kumaraswamy, in his tweet, expressed concern over the ongoing strike at Toyota Kirloskar’s plant at Bidadi, saying “no solution appears to be in sight.”

Alleging that the ‘apathy’ of middle level managers and the government had resulted in the strike, the JD(S) leader said there was a dire need to end the impasse in the interest of industrial development.

“The company has pushed its 3,000 workers into the streets either by supporting the stand of the middle level managers or acting on flimsy charges against the staff.

“It is not proper on the part of the companies that thrive by utilizing our land, water, air and infrastructure to behave in such a cruel manner with our own people.

Those heading the company should set aside their prestige and act in a humane way,” Kumaraswamy stated.

He said that in several meetings he had held to try and resolve the crisis, it clearly appeared the middle level managers were trying to create confusion and problems.

The JD(S) leader noted that Apple had acknowledged that managerial lapses were responsible for the violence at Wistrons Kolar plant that manufactures its I-phones.

A section of workers at the Wistron plant, run by the Taiwanese contract manufacturer for Apple at Narsapura in Kolar district, had gone on a rampage on Saturday over alleged delay in payment of salary and overtime wages.

“Wistron also stated that it would treat its workers with dignity.

Sending a strong signal, Wistron has removed its vice- president.

The Toyota company too should introspect in the wake of the stand taken by Apple,” the JD(S) leader said.

TKM had suspended operations at its plants on November 24 over the continued strike by workers protesting against the suspension of a worker.

Kumaraswamy said the government should intervene and take an initiative to resolve the imbroglio on a priority basis as resolving the labour crisis would benefit the state.

“Incidents like workers strike, protests and rampages will lead to investors losing their confidence. It will create an opinion that the situation in the state is not conducive to run an industry,” he tweeted.

He also said the state government has given necessary instructions and such things would not be repeated.