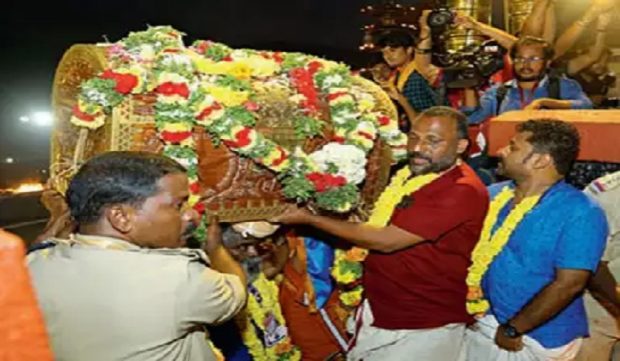 As COVID-19 protocols were in place, only a few people, instead of the hundreds of ardent devotees usually seen, could accompany the annual procession.

The procession had set off four days ago from Aranmula Sree Parthasarthy temple, one of the State’s prominent shrines dedicated to Lord Krishna, where the sacred attire is kept.

The royal head had offered the ‘Anki,’ weighing 420 sovereigns, to the Sabarimala deity in 1973, according to the Travancore Devaswom Board (TDB), the apex temple body which manages the shrine.

Ahead of every Mandala Pooja, the ‘Thanka Anki’ is taken from Aranmula to Sabarimala in a ceremonial procession.

The motorised chariot, carrying the sanctified ‘Thanka Anki,’ is given a rousing reception with pilgrims gathering in huge numbers at various points of its transit, TDB sources added.

After reaching Pampa, the base camp, in the afternoon, the procession carrying the sacred attire proceeded to the Sannidhanam, the temple complex, located atop the holy hill.

Tight security arrangements were put in place throughout the trekking path, from the base camp to the temple complex, for the smooth conduct of the procession.

In the wake of the COVID spread, authorities had put restrictions in the number of people accompanying the procession.

The usual receptions accorded to it in various places since it began from Aranmula Temple, was limited at scheduled centres only this time, TDB officials said.

Lord Ayyappa would adorn the sacred attire for the auspicious ‘Mandala pooja’ on Saturday, which would mark the culmination of the 41-day pilgrimage season, the first phase of the annual festivities.