World’s oldest whiskey bottle sold for more than a crore The whiskey bottle is believed to have been distilled 250 years ago and was sold at six times the original price.

The Daily Mail reported that the Old Ingledew Whiskey was bottled in 1860, but the liquid inside it is believed to be at least a century older than that.

Auction house Skinner Inc. estimated the bottle would fetch between $20,000 and $40,000, although the bottle was sold to the Morgan Library, a museum and research institution in midtown Manhattan, for $137,500, in an auction that ended on June 30.

The whiskey once belonged to the famous financier, John Pierpoint Morgan. 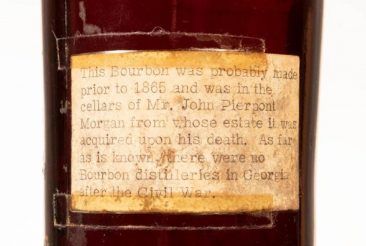 “This Bourbon was probably made prior to 1865 and was in the cellars of Mr. John Pierpoint Morgan from whose estate it was acquired upon his death,” read the label on the back of the bottle.