A matrimonial advertisement of a woman who has taken the jab and is looking for a vaccinated groom has surfaced on the internet.

In the ad, a 24-year-old self-employed woman claims to have received both doses of Covishield and is looking for a man who, along with other desirable traits, must be completely vaccinated.

The cutout of the newspaper ad quickly gained a lot of attention online and caught the attention of Congress MP Shashi Tharoor. He said, “No doubt the preferred marriage gift will be a booster shot!? Is this going to be our New Normal?” 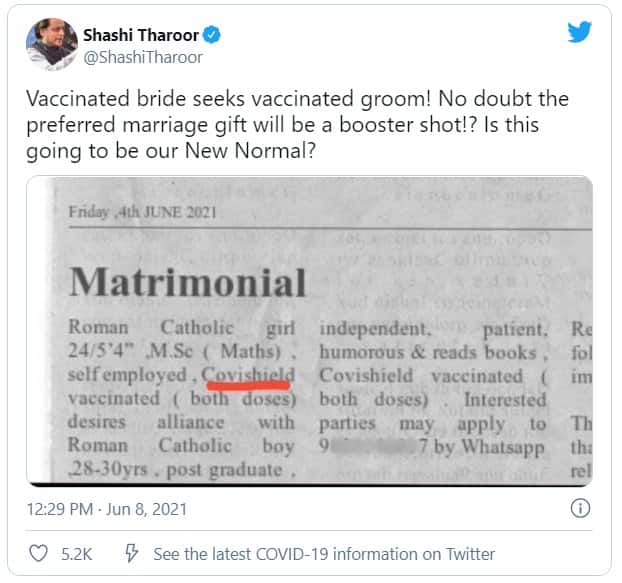 The ad was originally posted on Facebook last week. It was titled “The future of Matrimonials,” and was posted along with a phone number of a vaccination center.

The ad was a harmless campaign launched by a man named Savio Figueiredo, a community pharmacist from Aldona, Goa, to influence people to get a Covid vaccine shot.

According to a report, Figueiredo asserted that it was never meant to go viral and the post was just for people on his friend list on the platform.

”This IS INSANE”: Africa desperately short of COVID vaccine
Mangalore cucumber or Chennai cucumber? Know its origin and health benefits