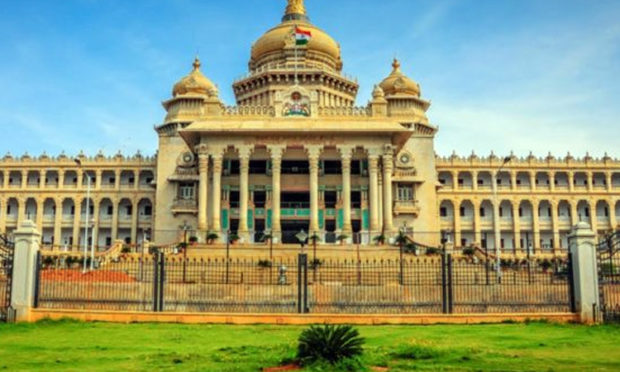 Bengaluru: The monsoon session of the Karnataka legislature will be held from September 21 to 30 in the Vidhana Soudha here with all precautionary measures for coronavirus such as face masks for members and a bar on visitors, state Law and Parliamentary Affairs Minister J C Madhuswamy said on Monday.

Today the Speaker of Karnataka Assembly Vishveshwara Hegde Kageri and Chief Secretary and K M Vishalakshi inspected both the Houses (assembly and council) and decided to hold the monsoon session of the Karnataka legislature at the Vidhana Soudha itself, he told reporters here.

In view of the coronavirus pandemic, the members will be given face shield, masks and sanitisers at the entrance of the assembly and the legislative council, the minister said adding visitors will not be allowed this time to witness the proceedings.

In addition to it, there will be screens between seats while journalists would have two galleries instead of the usual one, he said. The last session had taken place from February 17 to March 24. As per the Constitutional provision, the next session should take place within six months from the day the last session concluded. Though earlier the idea of conducting the session outside the Vidhana Soudha was considered, it has been now decided to hold it in the premises itself with adequate arrangements.

A few MLAs have tested positive for coronavirus in the state in recent days with BJP legislator Avinash Jadhav, representing Chincholi Assembly segment, becoming the latest to contract the pathogen.